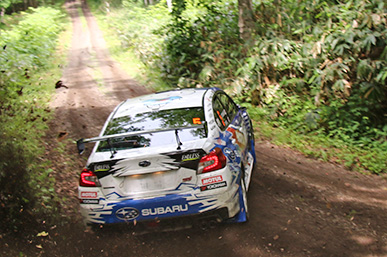 The 2021 ARK Rally Kamuy was hosted by Niseko City in Hokkaido. The rally was the first of the three consecutive gravel events in this year’s Japanese Rally Championship. Although the rally had to be canceled last year because of the Covid-19 pandemic, it welcomed a limited number of spectators who applied for it in advance for the first time in the 2021 JRC calendar. There were gallery stages, too.

As was the case in the 2019 version, the rally base was Niseko Annupuri, which is internationally famous as a winter resort. The stages were set up around Rankoshi City, one of the most fertile rice-growing areas in Hokkaido. For the two days of Saturday and Sunday, July 3rd and 4th, there were 12 Special Stages, and their total distance was 108.84km.

The competitors went out for recce on Friday, July 2nd. Unfortunately, the sky was overcast throughout the day and occasionally drizzle as well, so no one could enjoy a view of Mt.Youtei, well known as Ezo Fuji (which means Mt.Fuji in Hokkaido). The route was identical to the last time, two years ago, and it was the same time of the year, but many drivers reported the road looked narrower than before due to overgrown vegetation. They also said the lines they could choose were limited and slippery since there was grass in the center of the track.

The weather recovered on Saturday. The rally began under strong sunshine, with the high at Rankoshi City reached 25.8 degrees centigrade. With the arrival of Skoda Fabia R5 and Toyota GR Yaris, the whole picture of JRC has been changing this season. However, the potential of these newcomers on the gravel roads was still unknown, so the opening stage, SS1 New Sun-Rise 1 (3.69km), was the one to watch for everyone.

The stage saw the Subaru WRX STI’s one-two finish. Toshihiro Arai / Naoya Tanaka came in second here by 0.5 seconds, which was a good start to the rally for them. Arai then set the fastest times in two stages running, SS2 Knoll 1 (7.73km) and SS3 Orchid Short 1 (11.91km), and ended the first half of Leg 1 as the rally leader.

Many expected Arai to extend the lead in the remaining stages in Leg 1, but then his car had a failure with the water injection system, which cools down the car’s intake air intercooler. This significantly reduced his car’s engine power and impaired Arai’s dynamic driving style. As a result, he had to settle for the third at the end of Leg 1, 6.4 seconds behind the new leader.

Leg 2 on Sunday was favored by fair weather again. Driving the repaired Subaru, Arai moved up to the second by winning the SS8 Stream 1 (10.48km). He clocked the fastest stage time in the next stage, SS9 Schunk 1 (15.23km), which was the first run of the rally’s longest stage, and regained the lead by only 0.3 seconds against his main rival’s Toyota GR Yaris.

In the second half of Leg 2, the duel between the top two just heated up, as they set an equal stage time in SS10 Magnolia Reverse 2 (5.38km). But, the next stage, SS11 Stream 2, saw that Arai was beaten by 0.8 seconds and fell back to second. Thus, the final stage of the rally, SS12 Schunk 2, became the place of the shoot-out to decide the winner.

The stage winner of Schunk 1, Arai, went for an all-out attack and bettered his time in the first run by 21 seconds, but it just fell short of reverting to the top slot. After 108.84km of competitive distance, he lost out in the end by only 0.7 seconds, which is almost equal to a blink of an eye! However, he certainly put an end to a string of bad luck and looked very promising for the next round, Yokote Rally.

Turning to other JN-1 class competitors, Hiroshi Yanagisawa / Takahiro Yasui, driving Skoda Fabia R5, went off the road and were forced to retire, as Yanagisawa was too optimistic when he entered a corner in the first stage of Leg 2. Fumio Nutahara / Shungo Azuma also had to drop out in Leg 1 because of their Toyota GR Yaris’s gearbox problem. The pair restarted in Leg 2 after getting a new gearbox, but the same kind of failure nullified the team’s effort.

In the JN-3 class, Nao Ohtake / Megumi Fujita in Toyota 86 struggled a little in Leg 1 but tried hard to regain their genuine pace by making fine adjustments on the car setup. As a result, they were in second and 23.7 seconds behind the leader at the end of the leg. But a turnabout was still possible, as the total distance of stages in Leg 2, 62.18kg, was longer than that of Leg 1, 46.66km.

The gap between the top two decreased to 12.2 seconds, as Ohtake won SS7 and SS9 in the first half of Leg 2. In theory, if he would drive 0.4 seconds per km faster than his main rival, he would become the leader after the remaining three stages. However, after finishing SS9, he had a gearbox malfunction and lost the first and second gears when returning to the midday service. Fortunately, his team’s mechanics managed to change the gearbox within the allowed service time, 20 minutes, so that he could rejoin the second half of the leg without any time penalty.

To answer the mechanics’ exertion, Ohtake showed brilliant performance in the last part of the rally. And, partly because of heavy pressure from him, his main rival was forced to retire in SS10. After that, Ohtake led through the remaining stages of the rally by winning all of them. This was his second victory of the season and his first in a JRC gravel event.

Seiji Yamaguchi, driving Toyota 86, paired with Mami Yamamoto for the first time in a long while. Unfortunately, they suffered a lingering problem in the car’s electric system, but Yamaguchi never gave up and managed to finish the rally in second.

Hiroshi Sudo / Masakazu Arai in the JN-4 class Suzuki Swift also endured a challenging rally and ended up being runner-up. But the veteran showed his typical persistence and survived the rally, which saw not a few retirements, trying to sort out the car setup en route. In the end, he set the fastest time in SS10 and SS12 with a preferable setup he finally found, so he must have valuable knowledge for future rallies.

—Result : 2nd. in the JN-1 class—
“We just lost the battle in Leg 2… I never made any mistakes, and I can’t believe we could finish the rally after such an intense drive! Only 0.7 seconds gap after 108.84km competitive distance, so I feel a rather strange kind of exhilaration instead of disappointment. We had a minor problem in Leg 1, but I won’t say ‘ifs and buts’ about it because we regained the lead after that and then lost it because of the final battle. Before that, I was so surprised by the GR Yaris’ improvement in performance, to be honest. We need to figure out something to fight against them until the next round in Yokote, but our car has almost reached its full maturity now. Reducing our body weight is one of a few things we can do. But it isn’t realistic because if I lose 10kg, my body-fat percentage will come close to 2 % (Laugh).”

—Result : Winner in the JN-3 class—
“It looked difficult for us when we were more than 20 seconds behind the leader. But the feeling of the car became better when we started the first stage of Leg 2 after some setup change overnight. However, when I stopped the car at the finish of SS9 and tried to start it again, I found the gearbox didn’t work properly. I must say ‘thank you’ to our mechanics, who changed the gearbox within the 20-minute midday service time allowance. I ran in a panic at the sight of my rival’s halted car in the second half of Leg 2 because, suddenly, I began to doubt if we would get to the finish… But we managed to do it and secured our second win this year. I want to head to Yokote, carrying this good memory. As you may know, after my last victory in the championship, I retired the next meeting by a crash. So, my first priority in Yokote will be finishing the rally!”