WedsSport ADVAN GR Supra Misses Out Pole By 0.051 Seconds
They Finish In Second After Fighting For Win 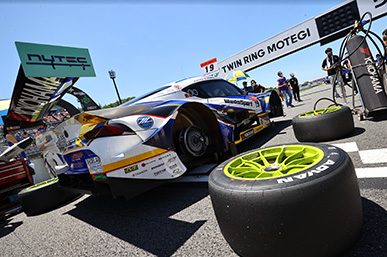 The fourth round of the 2021 Super GT series at Twin Ring Motegi, Tochigi prefecture, was held after about ten weeks of absence because the third meeting, which was initially planned in June, was postponed to August. It was just after the weather bureau officially declared that the rainy season was over, so the event was run entirely on a dry track, but the heatwave in the area was relentless. And the battles on the track were heated, too.

In the GT300 class qualifying, twelve Yokohama Tire users, six each from Group A and B, managed to advance to Q2. The most remarkable was Seiji Ara, driving Studie Plus BMW, who set the fastest time in Group B, and no other driver in the group went around the track below the 1’48” border. Joao Paulo de Oliveira in Realize Nissan Automobile Technical College (NATC) GT-R also performed well. He was the second-fastest in Group A despite the car carrying a 72kg success weight.

In Q2, Yuui Tsutsumi, paired with Atsushi Miyake in Takanoko-no-yu GR Supra GT, missed the pole position but secured the second grid. And Realize NATC GT-R in the hands of Kiyoto Fujinami followed in third. GoodSmile Hatsune Miku AMG, driven by Nobuteru Taniguchi and Tatsuya Kataoka, and JLOC Lamborghini GT3 with Takashi Kogure / Yuya Motojima behind the wheel came in fifth and sixth, respectively. So, Yokohama Tire users looked quite promising for the race.

In the GT500 class, Yuji Kunimoto at the wheel of WedsSport ADVAN GR Supra qualified in third in Q1. Then Ritomo Miyata in Q2 carefully warmed up his tires and set the second-fastest time. And his last qualifying attempt was even more thrilling, as he was fastest in Sector 1 and 2 but had to abort the lap because he nearly lost control in Sector 3. Anyway, Miyata’s effort in Q2 was good enough for the front-row start.

Realize Corporation ADVAN GT-R, driven by Mitsunori Takaboshi, failed to survive Q1 since he ended the session in the 11th. Thus, his co-driver, Daiki Sasaki, didn’t have an opportunity to perform in the qualifying session.

The race day came with the continuous heatwave. While the air temperature was 34 degrees centigrade, which was the same as that on the qualifying day, the track temp was at 51 degrees, eight degrees higher than the day before. But such harsh conditions didn’t disturb the WedsSport ADVAN GR Supra drivers.

At the first corner, immediately after the start, Kunimoto made a quick move on the race leader without any success. On Lap 6, however, by setting the fastest lap time at that time, he showed he could go faster than the leader and managed to overtake it at Turn 5 soon after that. Then he started to pull away from the rest of the field and the margin he had reached four seconds at a time.

He visited the pit on Lap 28 to hand the car to Miyata. But the team made a small mistake in tire change at the stop, which led to losing the lead position when WedsSport ADVAN GR Supra resumed racing. Miyata pushed pretty hard to catch up and clocked the fastest lap again on Lap 33, but his efforts didn’t bear fruit because the race’s second FCY (Full Course Yellow) got in his way. Nevertheless, Kunimoto and Miyata became the first Yokohama Tire users to get on the GT500 podium this season.

Realize Corporation ADVAN GT-R strategically made an early pit stop on Lap 24, and Sasaki changed to Takaboshi. But the team’s call didn’t make things better, and they had to settle for finishing in 12th at the end of the day.

In the GT300 class, Tsutsumi in Takanoko-no-yu GR Supra GT started the race from the second grid and kept the position. Fujinami at the wheel of Realize NATC GT-R, Kataoka in GoodSmile Hatsune Miku AMG, Motojima driving JLOC Lamborghini GT3, and one more car followed Tsutsumi, forming a group fighting for second. But the Supra driver was still leading the group and built a certain gap with others.

There was no position change between them during their first stints, but the situation changed after their pit stops. Firstly, on Lap 25, Tsutsumi came into the pit to change to Miyake, only to lose positions due to a lengthy pit stop. Then, on the next lap, Oliveira, who had just taken over the Realize-backed GT-R from Fujinami, collided with Kogure in JLOC Lamborghini GT3, and both of them lost a lot of positions.

As a result, Taniguchi in the GoodSmile AMG found himself running in third, the highest among the Yokohama Tire users when all crews completed the mandatory driver change. The team called Kataoka in on Lap 20, which was pretty early to make a pit stop, and replaced only two tires on the left-hand side to minimize the time spent in the pit. This certainly paid off to gain positions, but it backfired in the closing stage, as Taniguchi’s pace stagnated by his used-up right-hand side tires.

Therefore, he was overtaken by a rival on Lap 41, and Miyake was coming close to him from behind. Taniguchi finally had to give way to Miyake at V Corner on Lap 56. Thus, Takanoko-no-yu GR Supra GT finished the race in fourth, followed by GoodSmile Hatsune Miku AMG in fifth. Starting the eighth grid, Hoppy Porsche, driven by Takamitsu Matsui and Kimiya Sato, came in the sixth. Consequently, there was no Yokohama Tire user on the GT300 podium, but at least six of them managed to bring home championship points.

—Result : 2nd. in the GT500 class—
“I am entirely happy with my stint because I managed to move up to the lead position after starting from the second grid. The tires were incredibly good, and I felt confident when I tried that overtaking. I could feel the huge improvement of Yokohama Tire’s products during the race. We couldn’t win the race at the end of the day but we were fully confident when we began the qualifying session, thanks to the great efforts of the team, Toyota, and Yokohama Tire. I feel we are on the right way in terms of the tire development.”

—Result : 2nd. in the GT500 class—
“We were undercut by the eventual winner during the pit stop, and I was suddenly about five seconds behind. As for my stint, I thought I must try to give meaningful data to the tire engineers because it was the very first time for the tires that were brought in here to be used in race conditions. We must admit that we still have a lot to do to make progress from here. But I would say it is fortunate in a way that we feel disappointed to miss out a win which was within our reach. I am going to work even harder to win a race together with Yokohama Tire.”

“Regarding the GT500 class, we had a testing session in June here in Motegi, and the conditions today were pretty similar to those during the testing. We found a promising combination of construction and rubber in the testing, and it became the basis of the tires that we brought in this time. They seemed to be on the sweet spot and suited to the track and the conditions very well. Thanks to the drivers’ great job, WedsSport ADVAN GR Supra qualified in second and finished the race in second as well. We are pretty happy with the result. Our tires usually work better in the higher side of the temperature range, plus our new development, which we brought in this time, worked well.

“The tires for Realize Corporation ADVAN GT-R are quite similar to those for the Supra. But they haven’t found an ideal setup that can use the tire’s potential, compared to the WedsSport team. So we are going to share data further to help them to find the right setup.

“As for the GT300 class, it was a shame that we saw a collision between Realize NATC GT-R and JLOC Lamborghini GT3 around the race’s halfway point, but it was one of those things in motor racing. As was the case in the GT500, we also found a good construction for the GT300 class, especially for mid-engined cars, from the Motegi testing. So, we are somewhat optimistic for this class and looking forward to seeing better results in the coming races.

“The venue of the next round, Suzuka, puts a much heavier load on tires and we had a frustrating experience at Suzuka last year. Therefore, we will take a steady approach for it. In other words, we won’t try anything challenging but we are going to supply the tires which provide consistent pace.”